It was the summer of 2008 while touring in Munich with my family when I first learned of the shared bike program that Deutsche Bahn had been running successfully for a few years. The bikes, bearing the unmistakable “DB” in big red letters, in typical utilitarianistic German fashion, made the bikes easy to spot throughout the city, presumably so that people could find their mode of transportation after a few ‘das boots’ with ease. Once an available bike is spotted chained up to a light post or tree, the bicyclist could call the DB telephone number and enter the 4-digit code on the bike, and in turn, enters the code they receive back on the bike itself to unlock it. Since we are in 2015, there is also now an app which makes the process more seamless. When done riding, the bike can be locked up anywhere the user finds convenient. Even just learning about this new service, this is the part that struck me as evidence that this system relies on a communal effort to make this system run smoothly.

The first thing to note is that Munich pales in comparison to the size and population of New York City. Secondly, and probably more important, DB is a government-owned organization whereas Citi Bike is privately owned.

The bike sharing model is not unique to Munich as DOTs are finding that bicycles serve many benefits that can solve many city problems. In an effort to reduce emissions, road wear, collisions, and road and transit congestion and to improve public health, the New York City Department of Transportation (NYCDOT) researched alternative forms of transportation, publishing a strategic plan in 2008. It found that 10% of automobile trips are under one-half mile, 22% are under 1 mile and 56% are under 3 miles, distances readily served by bicycle.

However, Munich’s “leave anywhere” model would not work in NYC, and I would add that it probably would not work anywhere in the States, since people here are generally more litigious and pretty much everything is a fire hazard. Citi Bike uses long bike racks throughout the city where the user can purchase a pass, pick up or return a bicycle. In this very orderly setting, Citi Bike can easily maintain and service bikes without having to chase them down throughout the city. Although, occasionally a few slip through the cracks (Exhibit A, Exhibit B). The funny part, or actually terribly inconvenient truth is that some poor soul is left with a hefty bill since a series of unfortunate events led the bike to clearly go over the 30/45 minute allowance, let’s hope that Citi Bike is fair in their billing of these strange cases.

Anyone who has spent a winter in the Northeast will understand Citi Bike’s usage trend. Not only do people take fewer trips in the cold, they take shorter, more purposeful and direct trips on the bikes. Freezing temperatures are not a bicyclist’s friend, which explains part of the cyclicality, but another factor is that Citi Bike removes many of the docking stations to save costs due to low activity. As you can imagine, the summer is an excellent time for a bike ride in the city which explains why trips and mileage is at its peak. But an interesting observation is that although the Northeast is known for its 9-month winters, usage data shows otherwise. Most bikers are only willing to take other modes of transportations during the 3 coldest months of the year. New Yorkers truly are some of the most resilient people. 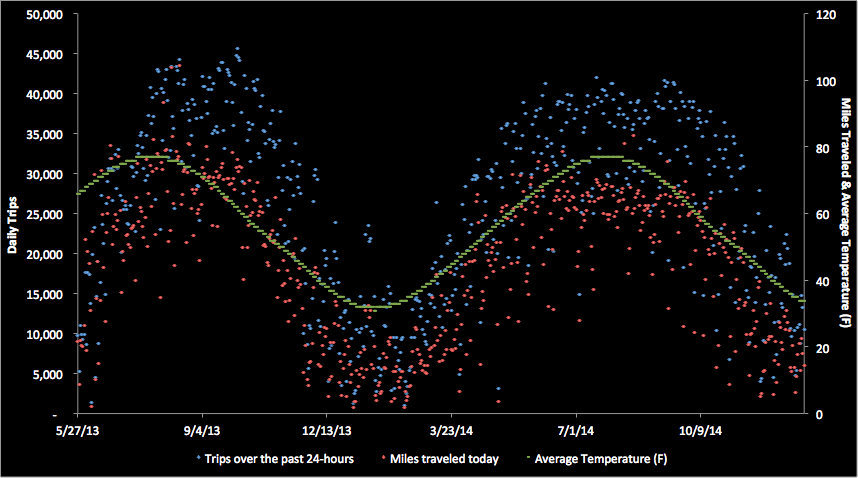 Flat tires and split seats. Docks roughed up from the harsh winter. These are a few of the more obvious signs that Alta Bicycle Share, the private company behind New York City’s Citi Bike, is struggling. The popular bike-share program is losing money and, as Felix Salmon writes “The annual memberships would be underpriced, at $95 per year, with all the profits coming from the daily and weekly renters,” he explains. “Certainly CitiBike is losing money on me: I’ve taken over 250 trips in the past year, which works out to roughly 37 cents per trip.” As of October 28, 2014, the annual memberships are now priced at $149, which equates to $0.41 per day.

In cities like Washington DC, the majority of the company’s revenue comes from tourists and one-time riders who pay the higher fees. But in NYC, the program is less popular with tourists but remarkably popular among locals. The irony of the situation is that the well-received City Bike annual membership among city dwellers is hindering its profitability.

Another financial burden the company faces is the contract with NYC to pay the city parking revenue it lost to docking stations. This could amount to $1 million for 2013, or 10% of annual membership revenue. Users are generally against this fee because they are both aware that it would be a cost handed down to them in the long run with higher fees and also that this is a public good where, like other means of public transportation, benefits many and offsets few. Although this sort of contract clause is uncommon for these types of programs, the city could use it as a bargaining chip for negotiations in the future.

Alta is currently expanding its bike-share network out to areas of Brooklyn and Queens, as well as Harlem. This means that starting in 2015, they will double their network, and by 2017, have 6,000 additional bikes and over 375 new docking stations. Are they saying we are fat?

The annual passes are now $149, up from $99, which will help generate revenue but why should they stop there? City Bike profits from short-term users, so they should offer more short term options. These short term users can be residents, but residents work and need to be in offices all day, so besides commuting to and from work, the bikes are unused. Tourists on the other hand, come to the city primarily to sight see (and go to Times Square to realize that was a bad idea), and what better way to see a city than to ride a bike? This is the target market because these people will be on the bikes all day, remember the time limit? Perhaps an aggressive marketing campaign launching in the spring could help to generate more usage from these short-term riders, and that time is coming very soon, given the riders’ definition of warm weather.

Miles Grimshaw wrote about exploring the data that City Bike gathers from each user and the implications of obtaining that data. I think he articulated the shift well:

Thanks in large part to the NSA, we are increasingly aware of the extent to which our digital lives are being tracked, recorded and analyzed. But it is easy to forget that our seemingly analogue activities can leave just as significant of a digital footprint as digital services.

A quick look at the data reveals a rather obvious point: more ridership leads to more accidents. That’s not telling us much. But if we filter through the noise and look for a meaningful statistic we start finding that cyclist accidents happen in midtown around 8pm. This unsurprisingly leads us to major intersections where traffic is thick, midtown Manhattan being the host to most of the accidents.

Ridership is at its highest level of the day in the early to late evening, when people are heading home from work or dinner. This is also the time of day when people are most likely to have a drink…or five. You know where this is leading, so I’ll skip the charades and just show the graph of the drunk driving hotspots (above). The red dots represent bicycle accidents and the constant animation represents the car accidents caused by driving under the influence of drugs or alcohol. Most drunk driving accidents occurred in midtown and downtown, creating a funnel-like heat map to the bridges exiting and entering the city. If you are riding a bicycle, these are stats to keep in mind. Safe riding!